‘revenant’ is an ongoing project with open membership that focuses on site-specific acoustic actions. All sounds originate from materials found in-situ, and from interactions with the space itself.

'There were some “dark” elements surrounding this session. It was mid-November in the Baltics which meant that it was cold, gray and the sun goes down early. By the time we entered the bunker and set up to record there was no natural light left to see. Trying to find a shared experience through improvisation among a group that is not familiar is hard enough, trying to do this in the dark in an unfamiliar place is even harder. Knowing we would be without visual and sometimes auditory communication because of the multiple spaces available I suggested to do a recording experiment, to each use our own equipment yet synchronize the timing at the start. If we were to get “lost” or immersed in our own experiences, it would be interesting to reassemble them later as a shared “fictional” space. This is indeed what we ended up with. Using only my ears and a headlamp to guide my way, I foraged through that unknown space collecting objects and playing them on the varied surfaces I discovered. I remember the old rags, the dust, broken pieces of concrete, pipes coming out of the ground and how I searched for ways to animate the space and instigate interactions with the others. Whether it was the quest for new objects or the need to stay warm I constantly moved around and even ended up outside toward the end. (John Grzinich)'
source =
http://unfathomless.wordpress.com/releases/u05/ 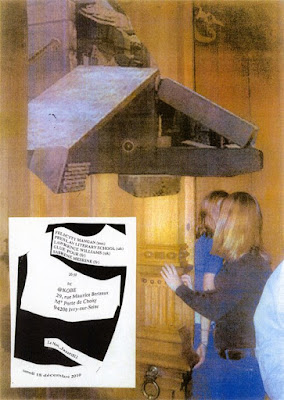