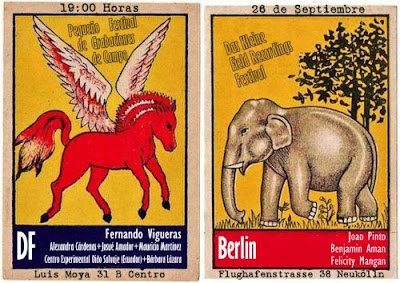 Text Source=http://dkfrf.wordpress.com
....
"The early autumn edition of dkfrf will be held on the same day in Mexico City and in Berlin. "

The performing artists are in order of appearance João Castro Pinto, Felicity Mangan and Benjamin Aman.
João Castro Pinto:Sound artist and more from Lisbon, Portugal, definitely a person with a short, middle and extended biography like everyone of us, João will take a break from his trans-disciplinary perspective of confrontation concerning the new digital media that he deals with during his tour and present the results of the recordings he made between Lisbon and Sintra. The title of the piece – Peripatetikós – refers to the walks by Aristitotle’s disciples. They probably needed these to get away from Ari’s talks every now and then.

Felicity Mangan is from Australia and on a quasi permanent vacation in Berlin. Part of her performance will/might be made up of the sounds from native Australian animals. She will focus on how they create vibration and percussive sounds. But there is still more to explore. Just come and hear…

Benjamin Laurent Aman will mostly play tapes. Nice! This means he will bring cassette recordings, a fact that adds to the pleasure of watching the artist in action. He has told me what sounds he recorded, but I am not going to list them all. The material reads as a map of France, but it also brings about the actions involved: travelling, visiting, waiting and coming home. The listener will be brought to public and intimate moments. Benjamin will move between climax and catastrophe. I am not sure if he will play drones.
Posted by ...// at 11:19

Last year Australian Animator Justine Wallace used 'Half Finished World' sound that was originally made for Dance project with Julia and Phoebe Robinson. Recently it has been shown at Sao Paulo Film festival, next month it will be shown at Salento Film Festival.